October 30, 2017 The Faculty of Applied Mathematics and Cybernetics held the first workshop in English on Probability Theory in Science. The workshop was organized within the university Project ‘Foreign Language Competence Development of TSU Students’.

The workshop was given by Professor Viktor Konev, Doctor of Physics and Mathematics, Head of the Department of Higher Mathematics and Mathematic Modelling, Leading research fellow in the International Laboratory of Statistics of Stochastic Processes and Quantitative Finance.

Professor Konev shared his experience and knowledge with first-year students. He emphasized that learning languages is a key factor of success. The English language helped him to become a good researcher and to be recognized all over the world. Professor Konev received a Fulbright grant and worked in Stanford University. He has visited such countries as England, Germany, France, Australia, and many others. He knows how important English-speaking skills are.

Currently, the probability theory is a complex discipline that takes into account various factors. Methods of the theory are widely used in such branches as theoretical physics, technology, and even defence industry.

First-year students highlighted that the workshop was very interesting. However, they admitted that they have not studied the probability theory yet. They also said that it is much more difficult to listen and understand new information in English. Therefore, they need more practice.
Фотографии: 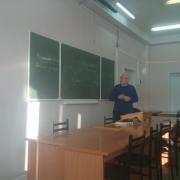 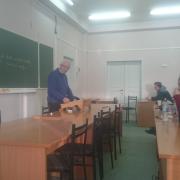 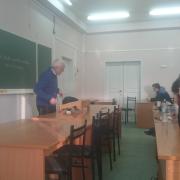 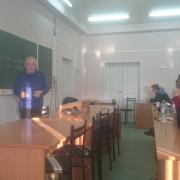